"A riot is the language of the unheard."
—Dr. Martin Luther King, Jr. 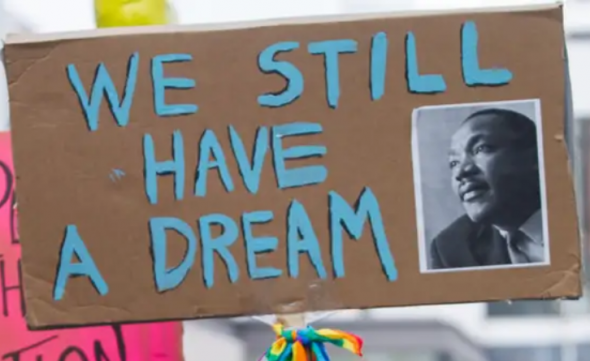 Dr. Martin Luther King, Jr. made it clear that we have to think and act transformatively about race, oppression, and inequality in the U.S., especially in moments of crisis. His words are quoted at rallies and marches across the nation, and they are powerful.

Understanding the language of action is essential for public health and the future of humanitarian and human rights around the world, in short, for the common good. The American public wants to be heard; the politicized vilification of "rioters and looters" is the last refuge of the same forces that have sought relentlessly to close off every avenue of democratic access and agency. We will not be silent about the excessive, lethal force used by the carceral police state that has also emboldened racist vigilantes and domestic abusers of women. Michael Brown, Breonna Taylor, George Floyd, and too many others yet unnamed, including trans women of color, have been assaulted or killed as a result. The social protesters in cities across the U.S. are also expressing rage against the U.S- American apparatuses of militarized force, racial fearmongering, fascistic thuggery, institutionalized misogyny, systemic transphobia, mendacious propaganda, and imperial violence. If these are not appropriate targets for rage, we cannot imagine what would be. To say Black Lives Matter is to say the least.

At this time of societal crises, we, the faculty members of the Dartmouth Consortium of Studies in Race, Migration, and Sexuality want to reiterate our resolute stance against anti-Blackness and all forms of racism and xenophobia, and to urge awareness of the longer histories between the state-authorized, unpunished killing of African American men that is central to the public's current outrage. 2020 marks the 401st year since the first enslaved Africans were brought to colonial Virginia. The legacies of racial slavery continue to reverberate in contemporary Black life in the Americas and globally. Today, we can trace the sources of that lethal violence to anti-Black, carceral state logics; white supremacist nationalism; parasitic, predatory capitalism; settler colonial dispossession; extractive cruelties; and murderous policing that have unnecessarily cost so many lives as the pandemic continues disproportionately to ravage disenfranchised communities not only in the U.S. but also around the world.

The surge of anti-Asian violence and the official scapegoating of Asian and Asian American people for the pandemic, and the disproportionate toll the pandemic has waged on African American communities are yet more symptoms of our diseased states. Black bodies are working jobs deemed "essential" during the pandemic yet are dying at alarming rates due to racial disparities in the healthcare system. Meanwhile, the murder of

George Floyd and the continuous governmental disregard for the Black community in the age of COVID-19 have renewed calls for Asian American, Native American, and Latinx solidarities against anti-Black racism and the imperative of coalitional thinking and action in transnational and decolonial terms.

To our students, we love and value and want to support you. Many of us are here at RMS to listen. We are ready to act in solidarity.

*In an earlier version of this statement, we failed to acknowledge the Dartmouth Student Union's (DSU) work in creating and maintaining the list of resources to donate and sign petitions. We take full responsibility for our mistake and want to credit this student group for its tireless work. It is not the RMS's intention to take credit (if inadvertently by editorial oversight) of a student organization's labor at the forefront of our campus' activism, and we want to thank the DSU for allowing us to mend our mistake. The DSU is a collective of undergraduate students and student-workers organizing for students on campus.